Gregorio Allegri was born in Rome in 1582, and became a chorister at the Papal Chapel in 1591 until 1596, when his voice broke. He subsequently became a tenor at S. Luigi del Francesca for the next 8 years, and studied with Giovanni Maria Nanino from 1600 until 1607. In 1604, he was a Singer and Composer at Tivoli and Fermi, and then became Maestro di Cappella at S. Spirito, in Sassia, Rome in 1628. 6th December 1629 saw his appointment as a singer in the Papal Choir, until his death on 17th February 1652, aged 70. He wrote a large body of work, of both instrumental and sacred choral music, favouring the style of his mentor Nanino, and his before him, Palestrina.

It was originally thought that he was born into the Corregio family, that of the late Renaissance painter Antonio Allegri, known as Corregio, but this has since been disproved.

He was buried in the Chiesa Nuova at Rome, in the tomb for members of the Papal Choir, where a (later) inscription reads: 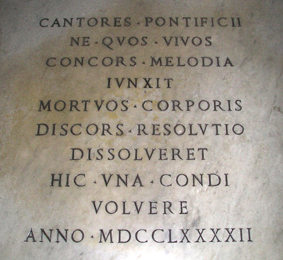 The Papal singers,
anxious that those whom Melody united in life
should not be separated in death,
wish this one burial place.
AD 1792

The portrait above is taken from a copperplate engraving of 1711. He is shown holding a five-part choir book with the opening G minor chord and the word Miserere.

The legend reads: Gregorio Allegri, Singer in the Papal Chapel at Rome, Most Excellent Composer, died on 18th [sic] February, 1652.

See our catalogue of works by Allegri.